What is your dream in this moment? 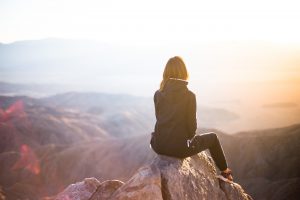 We are ever-evolving beings. Our dreams, too, evolve as we do. But, so often, we become attached to a dream we declared for ourselves five, seven, or even ten years ago. Something in us believes that we must stay connected to it and make it happen. Must we?

Born and raised in India where I lived until early 2008, my BIG dream was to get an MFA degree in Creative Writing.

I'd had my first piece of writing published in my dad's office magazine while I was still in high school.

Then, local newspapers started to publish my opinion pieces. In my twenties, I spent a decade in the advertising industry as a copywriter. When I stayed home to be a full-time mother, I began to write again.

I started with features and articles for national newspapers and international magazines, and soon a local paper hired me to freelance for them. My writing was published in seven countries.

I also wrote short stories and personal essays which won awards.I continued to dream about the MFA day and night.

But it was still an out-of-reach dream because we didn't have the money to make it happen.

When we relocated to Chicago in 2008, I began to feel that my MFA dream was coming closer. I could actually begin to feel it, taste it, touch it. Within a couple of weeks, I joined a writers group and began working on my first book.

When my mother died eight months later, something shifted.

My heart shattered. My life fell apart. The Uma I used to be died, and with her that MFA dream died.

Even as I wrote and published three books, two of them under contract by Hay House, I no longer felt connected to my MFA dream. Both books were finalists in the Chicago Book Awards. Yet, I was no longer attached to the dream.

I was much more interested in transformational writing, the writing that happens at the intersection of spirituality and soul evolution.

The structured format of a degree had no appeal for me. I was looking for mentors and teachers who were into "wisdom writing."

When a dream dies, we must find the courage to let it go. To not hold tight to it because it is connected to a part of our old identity.

Twelve years later, the perfect teacher has shown up. I've enrolled in a year-long writing program called Somatic Writing with Tanya Rubinstein. This is writing from the wisdom of the body. Asking the body for the stories it holds in my liver, lungs, gut, bones, and blood.

Are you holding on to a dream you no longer feel connected to? Is it because you're attached to the idea of being responsible, finishing what you started? Let me know in the comments below.

If you'd like to watch an Instagram Live I shared on this topic, you can watch it here.

Posted in Life Purpose and tagged dreams, letting go, somatic writing
← The Most Powerful Healer is Within YouOur Secrets Don’t Keep Us Safe →