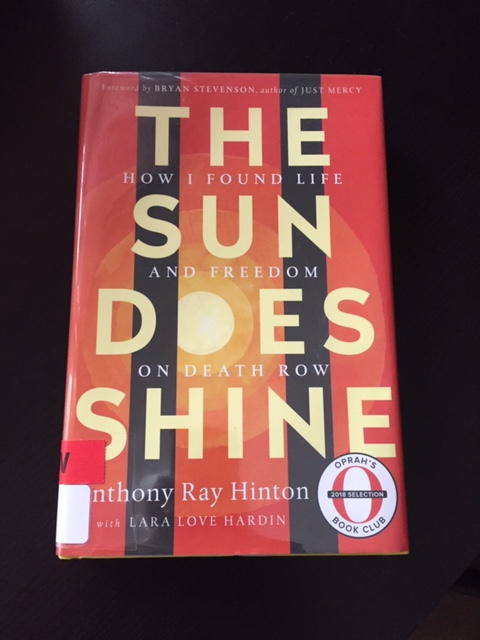 Recently I read a book that inspired me so deeply that I’ve been telling everyone I know about it.

The Sun Does Shine: How I Found Life and Freedom on Death Row by Anthony Ray Hinton is a true story. Ray, as he is known, is a 29-year-old black man living with his mom and earning an honest living to pay the bills when he is suddenly arrested for a series of crimes he did not commit. Worse, he is sent to death row.

It is thirty years before he walks out of that cell, a free man. He is nearly in his sixth decade of life.

Trapped in a 5′ X 7′ cell, Ray resolves to find his freedom right where he is. After three years of defiant silence, isolation, and murderous thoughts toward Judge McGregor who is responsible for his fate, Ray realizes that there is a better way.

It is the heart-wrenching sounds of a man crying in an adjoining cell that serves as Ray’s wake-up call. The epiphany arrives. It is about choices.

In that moment he decides to reach out to the sobbing man and learns that the man just got word that his mom died.

“I can’t describe exactly what it is to have your heart break open, but in that moment my heart broke wide open and i wasn’t a convicted killer on death row; I was Anthony Ray Hinton from Praco. I was my mama’s son…I didn’t have to think about people all around the world sitting on the edge of their beds and crying when there were almost two hundred men all around me who didn’t sleep, just like me. Who were in fear just like me. Who wept just like all of us. Who felt alone and afraid and without hope…it was a revelation to realize that I wasn’t the only man on death row. I was born with the same gift from God we are all born with — the impulse to reach out and lessen the suffering of another human being. It was a gift, and we each had a choice whether to use this gift or not.”

There are so many wonderful takeaways from his words:

Share your comments on which of these three takeaways inspires you the most.

Posted in Inspiration and tagged anthony ray hinton, book that inspired me, choices, death, death row, grief, oprah's book club, the sun does shine
← What Is The Difference Between “Doing” and “Being?”What I Learned From Our First Grief Healing Retreat →