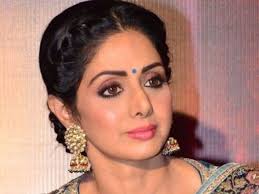 Late Saturday my husband called out to me from upstairs in voice of urgency. What could be so urgent at 10:30 in the night, I wondered, running up the stairs. He pointed me to his iPad and the ominous words on the screen:

I felt the floor shift beneath my feet. A hugely talented South Indian actress, a darling in Bollywood, was dead at the age of 54. I stayed up until midnight scrolling websites and Indian news channels for any snippet of information I could gather. In the days that followed I learned that the actress had lost consciousness, fallen into a bathtub and drowned accidentally. I watched YouTube videos obsessively, wanting to get to the truth of how this had happened. I guess I couldn’t wrap my brain around the fact that someone who was only a year older than me, had a birthday two days after me, and had been in excellent health, had suffered such a fate.

I was a teenager when Sridevi burst onto the big screen. I’ve watched almost every movie she’s starred in. An actress who essayed any role she played to perfection, she soon became a darling of the masses. It’s not just me. All of India is mourning her passing.

Somehow, her death has affected me profoundly. I didn’t have a personal connection with her, and yet I did–through the various characters she played.

It brings home the universal truth to me: Grief is the loss of connection.

So often we judge grief by the enormity of loss. I lost my 84-year-old grandmother, but my cousin lost her young bestie so her grief is worse than mine.

It’s important to remember that the loss of connection is what matters. Consider these situations:

You’re laid off from a job you enjoy–and you experience grief.

Your beloved spouse has Alzheimer’s, you feel cheated of the life you dreamed of but won’t get to have–and you’re grieving.

In each of these cases, there is a loss of connection. So please be kind to yourself–if you’re suffering something similar to the examples I shared. Know that your loss is every bit as real as anybody else’s loss. And that your heart is feeling the most appropriate emotion because of the circumstances you find yourself in.

Grief does not have to be one more thing we have to be ashamed of. Allow yourself to grieve your losses, large and small. It is in allowing grief to express itself that true healing begins.

As for me, I continue to think about Sridevi’s teenage daughters. I feel their pain. For I am a motherless daughter too. It’s a pain that comes to define the shape of your life.