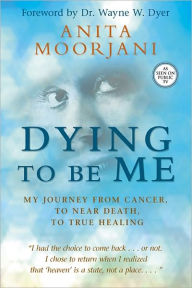 Anita Moorjani’s powerful memoir Dying To Be Me tells the story of her near-death experience and the choice she made to come back and heal. Not just herself, but millions of people who are struggling for answers on the earthly journey.

It all starts on April 26, 2002 with a lump on her right shoulder, just above the collarbone. Ignoring the ugly little voice in the back of her head does nothing to alter the diagnosis. The doctor pronounces  Stage 2 lymphoma. Four years later, having exhausted all treatment modalities–hypnotherapy, traditional Chinese medicine, ayurveda, prayer and chanting, yoga, and Western naturopathy–Anita is staring death in the face. Rushed to the hospital on the morning of February 2, 2006, comatose and grossly swollen, she is pronounced clinically dead. Her organs have shut down and there is little hope.

As nurses and doctors rush around attempting last-minute emergency measures, Anita leaves her body, floating above it with an incredible sense of freedom and a total absence of pain. Instantly, time and space cease to have relevance. She hears every word exchanged between her husband, Danny, and the oncologist 40 feet away from her bed; she also knows that her brother is on a flight to Hong Kong spurred by an urgency to reach his sister before it is too late.

The compelling part of the transition is that Anita wakes up to the realization of her true self: a divine being in a temporary physical shell. She describes a “sharpness of perception” in the afterlife, and the fact that she can “feel” everyone’s feelings–fear, hopelessness, resignation–as if they are her own. She describes the transition thus: it is not as if she’d moved physically to another realm but as if she’d awakened.

In the other realm, Anita meets her father and best friend Soni–who’d died ten and three years prior. “My experience was like a single thread,” writes Anita “woven through the huge and complexly colorful images of an infinite tapestry. All the other threads and colors represented my relationships, including every life I’d touched. There were threads representing my mother, my father, my brother, my husband, and every other person who’d ever come into my life, whether they related to me in a positive or negative way.”

In a turning point, her father tells her it isn’t her time yet, but it is her choice whether or not to return to her body. Anita is conflicted about returning to her disease-ridden body. And then an aha! “I discovered that since I’d realized who I really was and understood the magnificence of my true self, if I chose to go back to life, my body would heal rapidly–not in months or weeks, but in days! I knew the doctors wouldn’t be able to find a trace of cancer if I chose to go back into my body!”

Sure enough, five days later, she is transferred to a regular room and makes a miraculous and full recovery. Not a trace of cancer can be found anywhere in her body which was riddled with tumors the size of lemons just days before.

I found this memoir truly inspiring. I believe Anita was returned to the physical realm in order to teach us what is really important in this life. The biggest lesson for me was the reminder that I have all I need for this journey–if I trust in my magnificence. Anita also focusses on another theme which is: release all fears. She is convinced that fear caused her cancer. Fear of contracting the dreaded disease, fear of everything that produced cancer including microwave ovens, pesticides, preservatives and plastic containers, fear of life, fear of brutal treatments, fear of death.

“I’m at my most powerful when I am working with life rather than against it,” writes Anita in a memoir that is a must-have on everyone’s shelf.

I received this book for free from Hay House Publishing for review purposes.